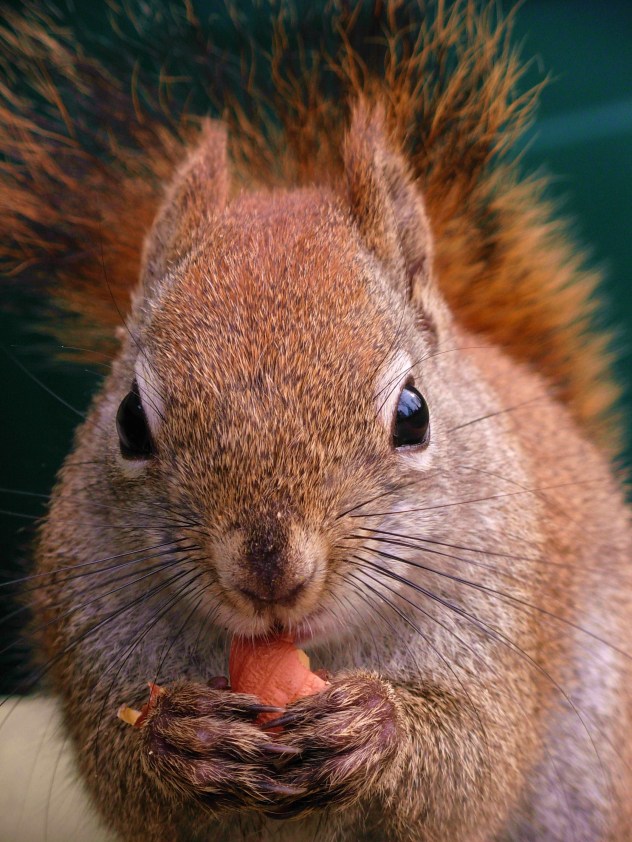 Well what can I say – I have a thing for bushy tails.

It all began quite innocently; in fact I was just a wee babe of 4 months old when my Mom set me out in the backyard in my stroller to catch some freckles in the summer sun.  Mom would tell me this story a thousand times.  “I left you for just 5 minutes to top up my G&T, to return and find three squirrels nuzzled up beside you in your carriage. I screamed fearing for your safety…but those three little squirrels just yawned in their sleepy bliss and tucked themselves further under your Yogi Bear blanket.”  Mom knew from that moment I would be a special creature.

Apparently it didn’t stop there.  When I was 5 years old, Mom was walking me to school and suddenly a feisty little red squirrel ran out from the bush and bolted up my tiny knee-socked leg, over my happy-face hot pants and stole a saucy kiss on my cheek.  Honest.  Like my Mom would lie?   And so began the legend of the squirrel whisperer child.

I didn’t share my secret relationship with squirrels, until much later in life; people already considered me an odd little waif. As a child I found great solace and camaraderie in my squirrel friends, they were so much chattier than my imaginary friends.  As a teen, it became harder and harder to hide, I mean I couldn’t sit on a park bench without a flurry of furry tails vying for my attention. There was Pablo who had a thing for my red patent shoes, Norman who like to rummage through my pockets and Russel who had the most melodic shrill of any squirrel I’ve ever sung with.  It was quite the scene and the bushes were a bustle with covert squirrel rendezvous – I honestly didn’t have time for a real boyfriend.

Years passed; pounds of peanuts and many ankle scratches later I found great fortune in acquiring my own little piece of magic land in the northern woods of Ontario. It was there that my fetish for fur ball kinship would develop into an other worldly realm. It was there where I encountered Crackhead Betty. Betty was a pigeon- toed, puffy-lipped red squirrel from the back woods ghetto. Known to the forest folk as a chest pounding, bushy tailed menace who would lie, cheat and steal your man for a cheap nut.  But I took to Betty and her wild woodsy ways. I had heard from my other forest friends (yea they speak to me as well) that she was left by her loser Mom at birth and spent most of her life alone without any love; so I made it my mission to tame that dame. It took time, trust and a few fisticuffs with a kamikaze fireball but one day we were just sitting on the step, chortling for hours, cracking peanuts by the pound, and low and behold she crawled up on my lap and took a squirrel snooze… the rest is history.  Betty became famous in those northern woods and a part of the Lowry family.  She even took residence inside the cottage one winter and often slept at the bottom of my bed only to wake me up with a brush of her scarlet tail in the morning before breaknutfast.

I could go on and on about stories that would curl your hair, but that’s enough revealing for now…us squirrel whisperers need to keep some things secret. I’ll just leave you with a little moral to this furry tale:  Always look far beyond the shell, for the hardest nuts to crack is where the sweetest love may dwell.