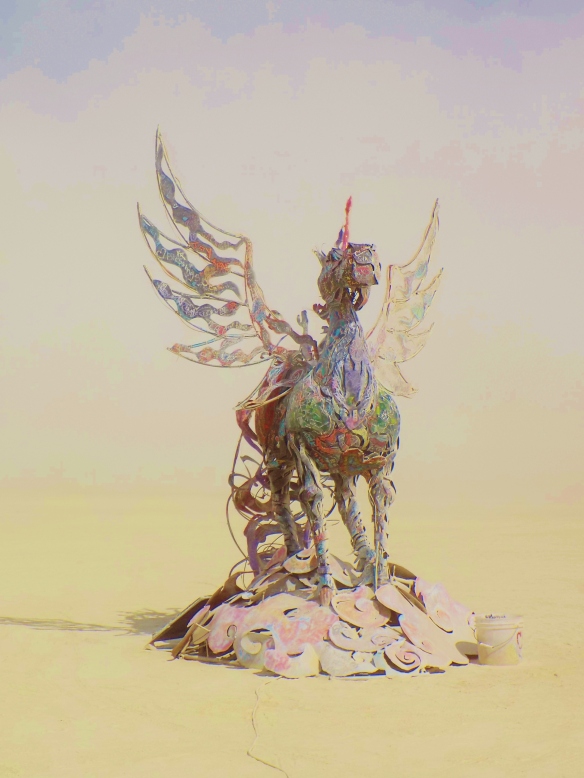 I am not a fan of New Year’s Eve. Even if it’s been an awesome year – I simply don’t like the ends of things…like the last chip in the bag, having to change a spool of thread with one inch left in the seam; the close up of the cottage in October, saying goodbye to my squirrels, wondering when we will meet again.  I like beginnings. I like being shiny and new. I like the first page of a blank diary…the best is yet to come.  That said – it’s that time. The big countdown. The illustrious review of a year gone by.

In short, it was an above and beyond awesome year. Absolute magic, dreams realizes, rainbow cornrows, Burning Man, big changes and a trip to Kenya in just a few days from now.

In long, it’s been a huge year of lessons and learning.  A sworn to the Gawds dedicated commitment of chipping away at the block and shape shifting the shadows. Bending and stretching, higher; standing on my tippy toes to seem bigger, bolder, reaching for the stars and beyond. It was a year of axe wielding, cracking the vault, lifting the veil and leaning into trusting myself and this party called life. I learned to let go of what no longer serves me, however much it had become a definition of my being.  I stood up and spoke up and was a big brave girl; by being vulnerable. I made peace where those bumpy bits fester and cleared shit out so there is more space for light. Then I jumped in the river and invited the flow to lead me where I needed to go; letting it babble, trickle, surge around me, through me, pushing, pulling and lulling me to my happy place, so I could unfold my wings and fly.

This year has been a magical whirlwind. Manifesting and making Burning Man a reality was one of the most profound experiences of my life. Long before I even stepped onto its sandy shore, it showed me magic is powerful and real.  Being welcomed into its bosom of plentitude and truth set my spirit and soul completely free and feeling free is the golden ticket for us to be our best selves, be our most powerful selves and make magic happen.  And man oh man did it ever happen!  I asked the wizards of dusty winds for change and a week after returning from the big Burn, I lost my job and found even more freedom. Freedom to play, freedom to wonder what if, freedom to explore, to run amuck, do nothing, do everything and do anything I wanted. Freedom to reinvent. Wandering and wondering on new pathways like a banshee lost in familiar woods, half wanting to play hide and go seek; half wanting to just hide.  My thoughts and emotions were on a joy ride, wildly abandoned, and yet culled into control to ponder new promenades.  At times I’ve felt like a dust speck in a tornado, twisting and turning in a vortex, dodging fences, cows and rooftops; while other times I was a silent screen star in a slow motion film noir. It’s been interesting times to say the least.  Times to test what I had been shown and learned.

They say “give time, time”.  Not sure who they are, also not sure how long they meant.  Some time, feels like an eternity, other time changes on a dime. Having a lot of free time can be really fun and it can also be really scary. You feel really lucky and yet you also feel really alone. You know it’s not going to last but you don’t know when it’s going to end, and you want to make it spectacular everyday but then there’s the guilt of all the “shoulds”, “what if’s” and “OMG”. Some days I was the Ring Master; other days flat out holding on with tiny toes to the high wire without a net.

Well the show must go on and so I grabbed my rainbow tutu and went to work to master the magic of being in the moment, while manifesting great tomorrows. To trust great things were just around the bend, while respecting Ms. Doubt and making friends with Ms. Fear.  I choose hope and “but of course I am destined for greatness” over despair and fetal position on the kitchen floor; but gracefully acknowledged the dust bunnies under the fridge… because I also vowed to be authentically real. I dared to express my thoughts, my heart, my hurts and trust I would still be loved. And then I promised to be grateful for every opportunity life presented – whether it be unexpected, intriguing, inspiring or challenging; and then give back tenfold.

This wonder filled year has given me an abundance of life! Beautiful, real friendships; beyond the moon and the stars experiences, a big shiny collection of new badges, sashes and crowns!  And most awesome… a wildly unperfected, but perfectly Pattyesque new way to dance, celebrate and be me…without apology, without fear, without hesitation, or guilt. That is real freedom!

And now I’m off to rub noses with some rhinos, swap secrets with the zebras, neck with a few giraffes and sleep with the kitties on the Serengeti.

Ends are just new beginnings. Thoughts are magic. Peace and stillness heals. Nature is God. Fantastical possibilities are just coming soon realities. And whether the sky is blue or swirling with dusty winds – the unicorn is always there – sometimes you just need to trust and see her smiling right at you.